Every dog has his Day - Tom Bracegirdle

Ideally, I’d have liked to have written individual blog posts about my winter training, moving back to Belgium and my first few races of the season. But it would appear that winter, much of spring and all the classics under the sun have come and gone without so much as a paragraph being written. But it’s ok, because I’m a cyclist and a racer, so you know I’ll have a list of excuses as long as my arm.

If I had a penny for every time I saw a rider pull out of a line when things started getting tough and then miraculously pull an excuse out of their you know where after the race had finished, then I’d be a very rich man. We’ve all heard them, from the scarcely believable to the downright ridiculous, i just don’t care for them. Someone recently tried to give me a list of excuses during a race as to why they were riding bad, I kid you not it was like they’d pulled a piece of paper out their back pocket with some pre-prepared excuses jotted down and proceeded to string them off like they were reading me my last rights. Don’t get me wrong, in the past I’ve probably tried to use every excuse going at some point or another, and you know you have too. The truth is, we’ve all punctured at a crucial moment, crashed hard, had someone in front of us drop the wheel, had a hard weeks training or been stupid enough to race when we’re a bit sick. But when it’s all said and done, the race is over, you’ve crossed the line (or not, because, you know… you snapped a spoke or something), it doesn’t matter to me in the slightest what good or bad luck you had. In five months’ time, nobody will remember if you had a crap race and got dropped, but they won’t forget seeing you win. They say, “every dog has his day” and I like to think it’s true. Forget the excuses and look for the positives.

So, you see, there are reasons why I’ve not written a blog post for such a long time. Some of them are personal and I’m really not prepared to talk about them on here. I also don’t like writing posts when I don’t have anything positive to write about. I got fully cleaned out by a car in training last month and then picked up a common cold which led to an ear infection for which I’ve had two courses of antibiotics (neither of which have done anything) so that was hardly worth writing about. But as you sit and read this, it goes without saying, that things must be quite positive at the moment, otherwise there wouldn’t be a blog post in front of you to read.

I’m living at Cafe Surplace this year, in the Antwerpen region of Belgium. I was a bit apprehensive about living above a bar/cafe but it turns out I love it. The owners are the salt of the earth, the locals are all extremely friendly and it’s great living with a group of other riders. If you have a bad race they can help you forget about it and if they do well it motivates you to do the same. Four of the other guys I live with are also Dave Rayner funded riders, earlier this year I was the rider interviewed for Cycling Weekly’s ‘Brits Abroad’ feature. At some point or another throughout the season all the other lads will be in the magazine as well, so keep an eye out. 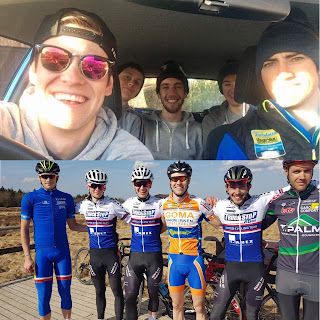 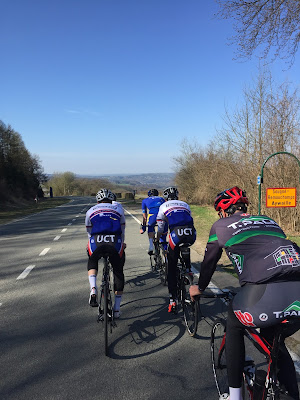 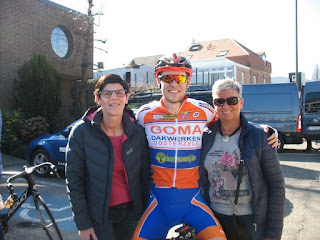 As I’m sure you’ll be able to tell from my very recognisable orange and blue kit, I’m racing for the same team this season as I did in 2016. Therefore, my calendar for 2017 is much the same; Belgium Cup races, Elite National 1 Interclubs and stage races in Belgium as well as some Elite races in France, interspersed with kermesse racing. Despite the fact all my photos from winter featured the borough of Macclesfield in the background and not the Mediterranean ocean, I’m confident that thanks to the help of my new coach, I started the season in great shape. March was a bit of a write off, for the reasons I spoke briefly about earlier on, so I’ve been focusing on re-building my strength and form again during the early part of the season. I’ve been feeling better and better with every passing race and despite only finishing in the bunch in both my recent team races; Driebergenprijs Stasegem and GP Affligem, I’m happy that I had the legs to be aggressive throughout. Last tuesday I was in Hakendover for a kermesse, the weather suddenly turned very bad on the start line and it became a race of attrition. I like races like that, I finished 9th and know that if I’d ridden a little more intuitively I could have been racing for the win. 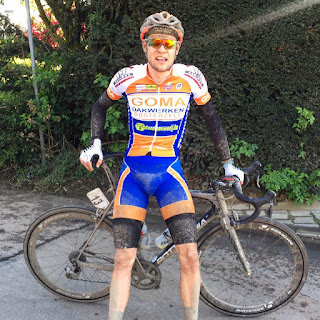 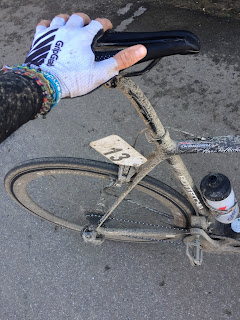 Unfortunately I picked up a throat infection after GP Affligem, I suspect it has something to do with all the cow muck I must have ingested earlier in the week in Hakendover (see photos above). Luckily I was already down for a ‘regeneration week’ this week anyway as I have no races, so maybe getting ill now was a blessing in disguise. I’m sure I’ll be back to full health for May, I’ll certainly need to be as I have a total of 14 races, including the Tour de la Manche and the first round of the Beker van Belge.

Thank you for reading, and thank you to all those who sponsor and support me,