Finally, this weekend, I got back to racing. The Spanish calendar has a break around Easter where riders have a chance to recover and rebuild. While I made the most of the down time, I couldn’t wait to get back at it. I wasn’t selected for the Copa España race this weekend in Jaen. Of the 12 riders on the team only 7 can ride in the Copa España, and it was my turn to sit one out. Luckily for me, this weekend there were two U23 races in the Basque Country which my team encouraged me to ride.

Saturday’s race was a 104km course in the town of Markina. A friend of mine also planned to race and offered to give me a lift. In the car, we talked over what was to come; we agreed the two ascents of Lekoitz would decide the race. Lekoitz is a famous climb in the Basque country, known for its 1.5km final ramp at 9.4% which will sort out any race. Instead of having switchbacks, like most climbs in the area, Lekoitz goes straight upwards. This gives riders no psychological break from the pain. It’s a climb that feels like it is never going to end.

As we pushed north from Tudela I began to get nervous: we were running late. We were going to make it in time for the start at 4pm but only with around 15 minutes to spare. Usually, this wouldn’t be a problem but when riding without a team you have to get there sooner to notify the race organisers. By the time we got to the town of Eibar, only 20km from Markina I rang ahead to speak to the race commissaires. Luckily for me they were OK with me getting there late as long as I showed them my licence before the race started. By half 3 we knew it was going to be tight. We took a shortcut through the town of Ermua and on a narrow street and hit a speed bump harder than we should have. The roof rack gave and we almost lost the bikes. We stopped and jumped out of the car to find that the rack had held by only 1 of the 4 attachments. We straightened it out, re-attached the mounts and pushed on. I had to get changed in the car and run to the start as soon as we got to Markina. With 3 minutes to spare, I joined the rest of the bunch on the startline. Not the best pre-race prep, but I was just relieved to have made it.

Over the past few months, I have raced on my own several times. I have got used to sitting in the pack and only spending energy when I can make it count. For me this means I have to let early breakaways go: with no teammates, I have to play it smart. A break in the first 50km is unlikely to make it to the finish, and I am better off saving my energy for the key points of the race. The first time we hit Lekoitz, I was well positioned. There was a small group of 4 riders just ahead of the bunch but they weren’t going to get far. I made it over the climb with the front group but two more big groups came back up to us before we hit Lekoitz for the final time.

With around 80 riders left in the peloton, we hit Lekoitz at full speed. We would go over the climb with 20km to go, perhaps too far for the strongest rider to get clear and make it to the finish, but the situation did suit a small group sprint. On the climb I was suffering, ahead of me I could see a bunch of riders going clear. I made a move to follow them but I didn’t have the legs. I went over the top with the main bunch of around 20 riders. Once down the other side, I looked ahead to the break of 10 who had got away on the climb. Not only were these the strongest guys, there was an equal representation of the teams meaning no one in my group wanted to help chase. I thought the race had got away from me but with 10km to go we hit a straight road and I got a chance to gauge the distance: it wasn’t as far as I had assumed. It was now or never. I attacked my group. After being on my own my own for a few minutes I managed to get across to the front guys. I was chuffed to have made it but it had taken a lot out of me, and I was hanging on to the back of the group as we went up a short drag with 5km to go.

As I caught my breath, I looked back at the second group. They were lined out chasing hard. It wasn’t long before they caught us. “Typical” I thought. I needn’t have chased across, I could have just stayed with them and saved my legs. I got up there for the sprint but I had nothing left and so came in 21st.

Sunday’s race in Durana was a similar course, twice up Salinas would decide the race, once after 50km and then again with 20km to go. What made the race in Durana hard to predict was that we would do the descent before the climb of Salinas. The race would begin on higher ground with some flat laps around the towns of Durana and Landa before dropping down to a village called Leintz Gatzaga. A long technical downhill section running parallel to the climb meant the bunch would be in single file before we took the 180 degree bend to begin Salinas. This made positioning for the descent important: hitting the bend badly positioned would leave you having to chase back on and at a disadvantage when starting the climb.

As I did the day before, I spent the first hour in the bunch. A big group had gone clear which looked dangerous: they were working well and not looking back. I rode up to the front to try and make sense of the situation. Speaking to one or two riders I learned that Lizarte, the Movistar feeder team, had not managed to get anyone in the breakaway. For me this was perfect: I knew before long they’d have to get on the front and bring the group back. Sure enough, after the first time up Salinas, Lizarte got organized. From the middle of the bunch I looked ahead to see a line of pink and black: 8 Lizarte riders were taking it in turns to drag the bunch along.

I sat in the front third of the bunch as Lizarte pushed on. I had to be well positioned to hit the descent to start the final climb: without a team to help me, I needed to sit behind Lizarte. Getting there wasn’t hard: I followed another team around the outside and pushed in behind Lizarte. I was where I needed to be, I just had to hold my position. I had to fight hard to hold the wheel in front: I had riders from either side trying to take my position. Just as we began going down towards Leintz Gatzaga with 30km to go, two teams moved up on the left hand side. I was boxed in on the right. As the road narrowed the crash was inevitable. Two guys came down in front of me, I hit the brakes and swerved. I was hit by riders from behind.  Before I knew what had happened I was on the ground with my left foot stuck in the wheel of one rider and my bike tangled up with a rider to my right.

By the time I was on the move again, the race was gone. I wasn’t hurt and my bike was OK but the bunch were out of sight. I chased on raced up the hill but I could only make it to the 3rd group.

After a disappointing weekend, my focus is now on the next few weeks. I have a busy period with the team coming up. Next week we have 4 races planned including two rounds of the Copa España. Thanks to a great ride in Jaen this Sunday, taking 3rd, 5th and 10th my team are 3rd on the team classification in the Copa, so hopefully I can play my part in consolidating that in the next 3 rounds. 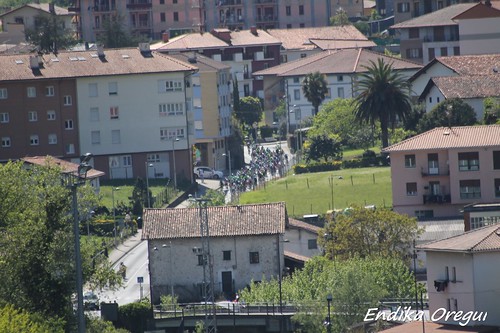