Rider Interview: Ed Hood has been talking to the ‘young blood’ coming through and next on his list of marked men is a Welshman making a name for himself in the ‘Heartland’ of French cycling – Brittany. Owen James gets the PEZ interrogation. 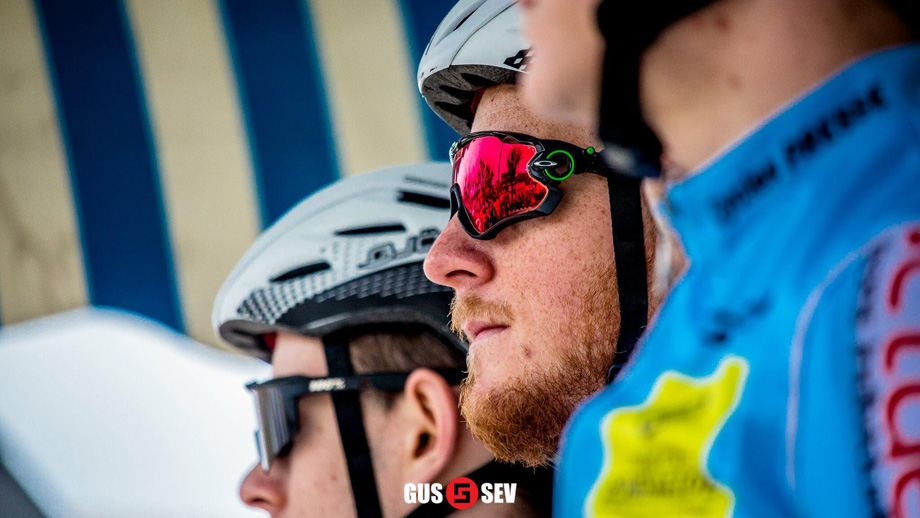 It may not seem like it but there are cycling life forms outside the pink glamour of the Giro. Take 22 year-old Welshman Owen James who’s doing it ‘old school’; find a club in France, move out there, race hard, get some results and a foot on that World Tour ladder. It’s long and slippery though – but a little help from the David Rayner Fund helps with the climb.

He’s with Équipe cycliste Côtes D’Armor Marie Morin Véranda Rideau and has had some nice form recently – but things are on hold just now courtesy crashing out of the Tour de Bretagne. Here’s what he had to say to PEZ the other day:

PEZ: The basics – you’re 22 and from Carmarthen in Wales – how did you get into cycling, Owen?
Owen James: Yes I am 22 so getting on a bit now. I got in to cycling because of my dad, he raced back in the day and took my brother and I out on the bike a lot when we were young. I did my first few races on the local bike track in Carmarthen at 12 years-old and kept going from there. I dabbled in cyclo-cross and MTB but decided I preferred track and road. Something about riding through mud in minus one conditions in shorts and jersey didn’t float my boat. 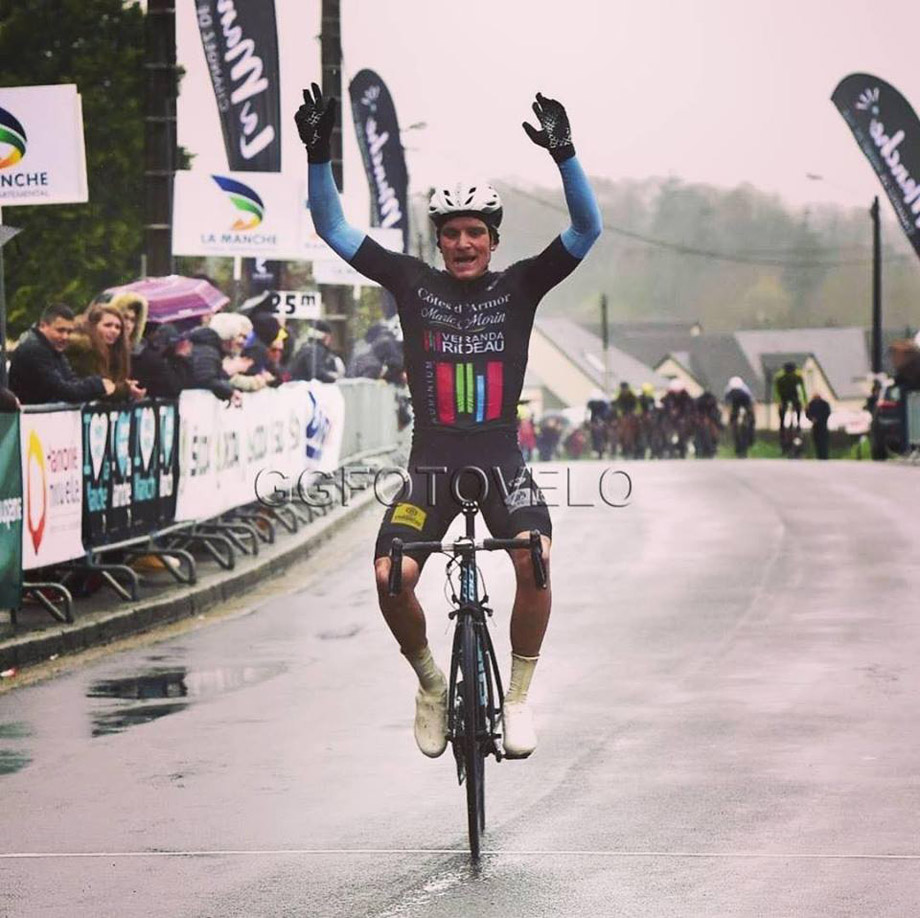 PEZ: You’re a David Rayner Fund man, what does the fund’s support mean to you?
The fund is a massive help. I’ve been flicked with a fair few continental teams promising a wage and it not happening. Dynamo Cover was one – If it wasn’t for the Rayner Fund last year I could not have gone to France. So I’m super grateful to those guys.

PEZ: And you’re an ex-Flavio Zappi team man, do you still keep in touch with Flavio?
Yes, of course I do; I got a message from him the other day saying “so, your good now” probably proudest moment of life. But in all seriousness what he is doing and the races he gets his team into are unreal. I learnt a lot from Zappi, he really opened my eyes into what the sport on the continent was really like. 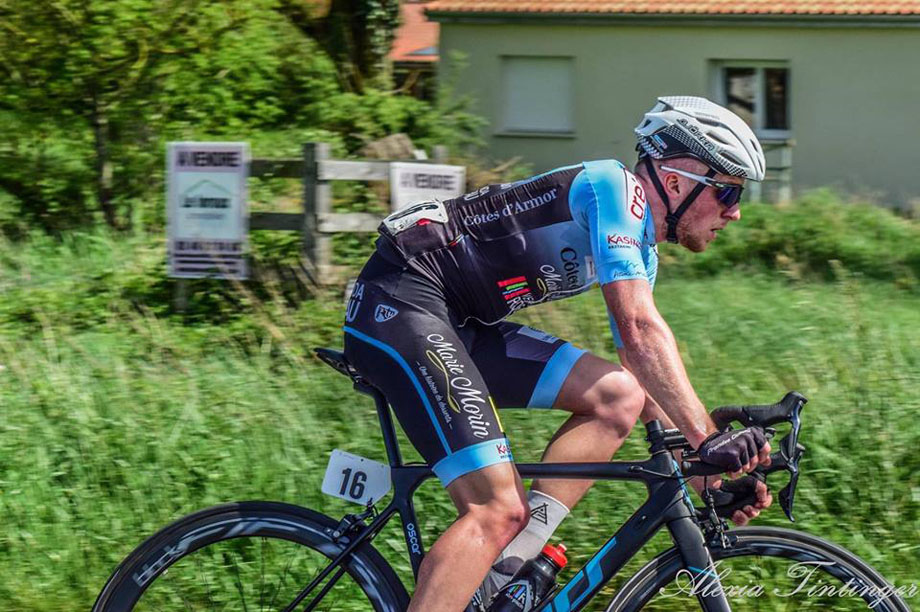 PEZ: Tell us about your team, Cotes d’Armor, is Verande Rideau a new sponsor for 2018 – and how did you get the ride with them?
The team has the perfect balance of having fun and seriousness. No shortage of beer but it’s the same for race wins also. We had the most wins in France last year. The balance of youth and experience is good too. We have riders who have been pro with the likes of Cofidis and Sojasun who are able to pass their experience on. For example Fabien Schmidt who has just won the Tour of Brittany, I have never met someone so good at reading a race as he is – he was with the Roubaix and Sojasun teams so raced at a high level. No doubt those boys should be pro but sometimes the money is better at the DN1 teams. I learnt a lot from those riders. Yes, Veranda Rideau is a brand new sponsor. A big one too. I got a ride with the team through Jean Vantalon and Nicolas Fritsch, they had a lot of contacts. I asked him on a Friday afternoon in September, it went from a dn3 team to a dn2 to having signed with Cotes d’Armor by lunch time.

PEZ: How well does the club look after you?
The team is great, any problems they have our back. We live in a really nice five bedroom house. I couldn’t really ask for much more. 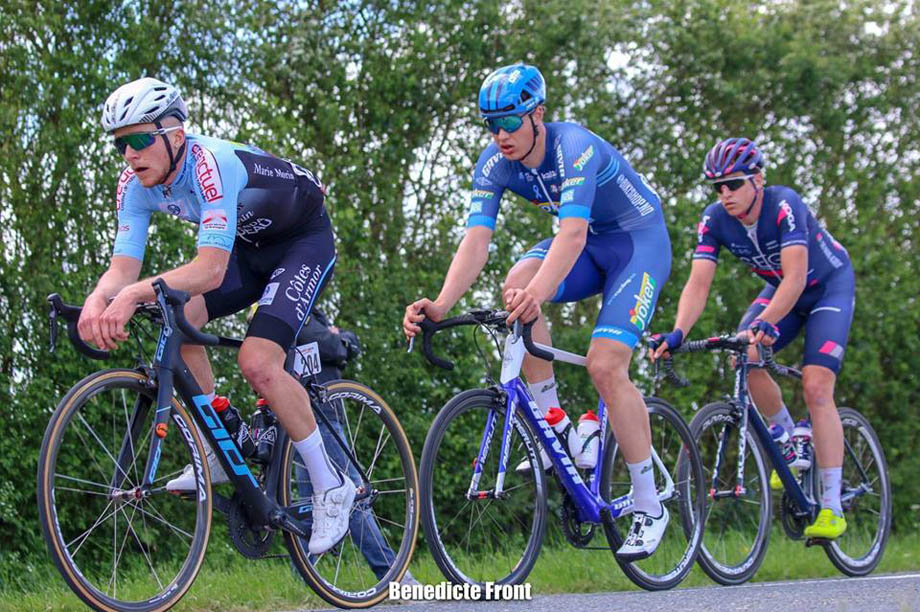 PEZ: What’s the team bike like?
Well, there are only a few guys left on the original team bike on the team. Me being one of them. But to be honest if you give me a free bike I’m going to say it’s the best.

PEZ: Are you still in Yffiniac, Bernard Hinault country – does it still feel like ‘Heartland?’
I am living in Quessoy now which is not far from there. For me not really, Heartland for me is Wales. 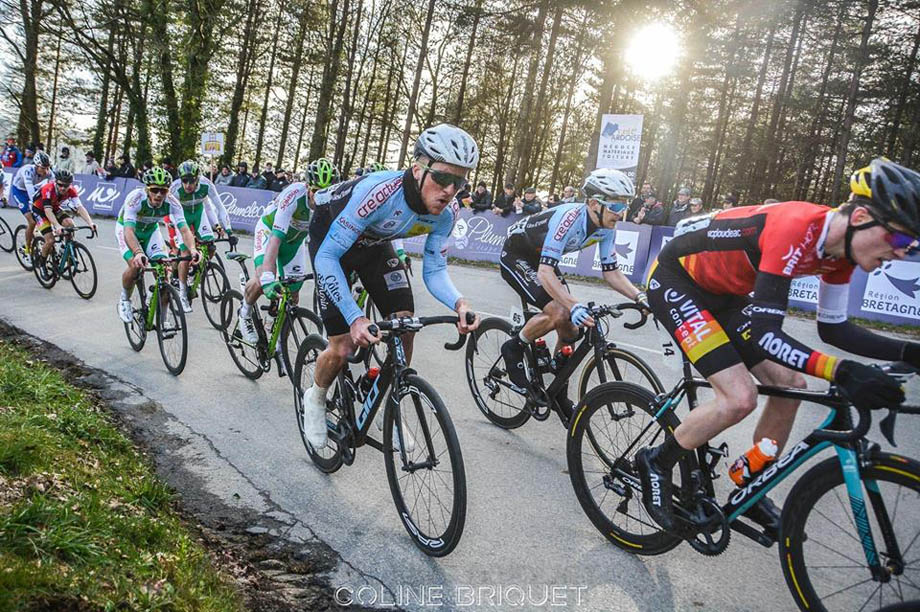 PEZ: How is the weather, Brittany can be a bit wet, can’t it?
It’s pretty similar to back home, a bit dryer if anything and warmer.

PEZ: Where do you stay and what’s the script with the mundane stuff – cooking, cleaning, washing?
Stuart Balfour and I are the chefs of the house – we whack out some sensational dishes. With cleaning I’m a bit OCD, probably get on the boys nerves. But for me some cyclists are disgusting with no life skills.

PEZ: A win in the Souvenir Andre Gisland race, congratulations, tell us about that one.
Yes, my first win in a while and the first one in France although I’ve come close a fair few times. It was a horrid race; rained all day but I always seem to do well in those. To be honest, 40km before the finish I didn’t want to be there. But a small group formed on the climb and we made it across and caught the front group of eleven just as we topped the climb. My team mate attacked over the top but it was closed down straight away. But I countered it and found myself solo all the way to the finish. One of the better days this season. 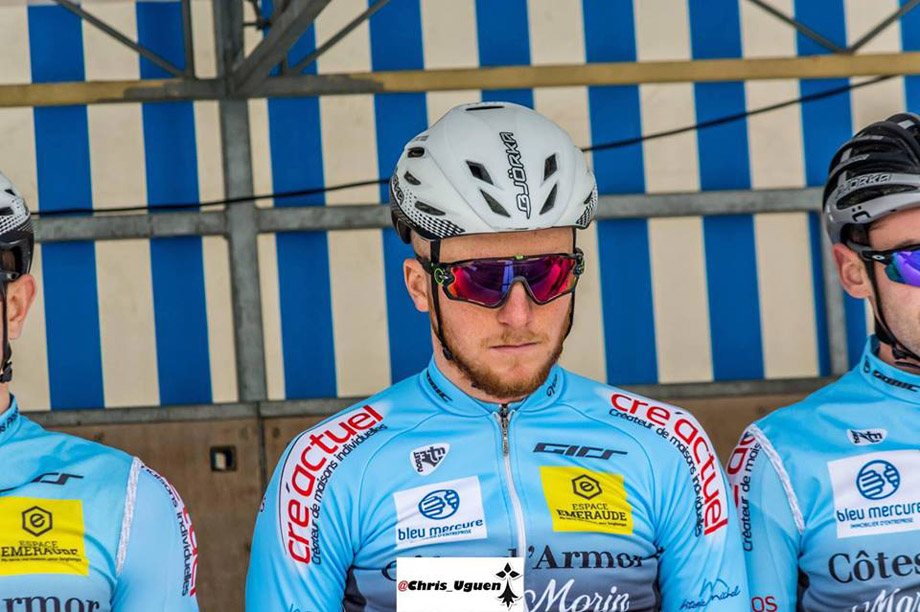 PEZ: And second on a stage and fourth on GC in the Circuit de Plages Vendeenes – what was that race like?
That was a tough old block of racing; freezing cold, rain and crosswinds. The format was six races over nine days. That was the first time noticing how much I’d improved over winter and that all the training was worth it. I was unlucky to not win down there but I put that down to bad mistakes. I missed out on the podium for the general by one point which kinda sucked.

PEZ: And recently third in the mountains in Loir et Cher – that’s a big race. . .
Yeah, that was a kick in the teeth, I could have won the jersey there but some bad communication cost me dear.

PEZ: What’s the programme looking like now?
There are still plenty of races left, I’m taking a few weeks easy back at home at the moment to recover from my dislocated shoulder. But I’m still motivated to win again. 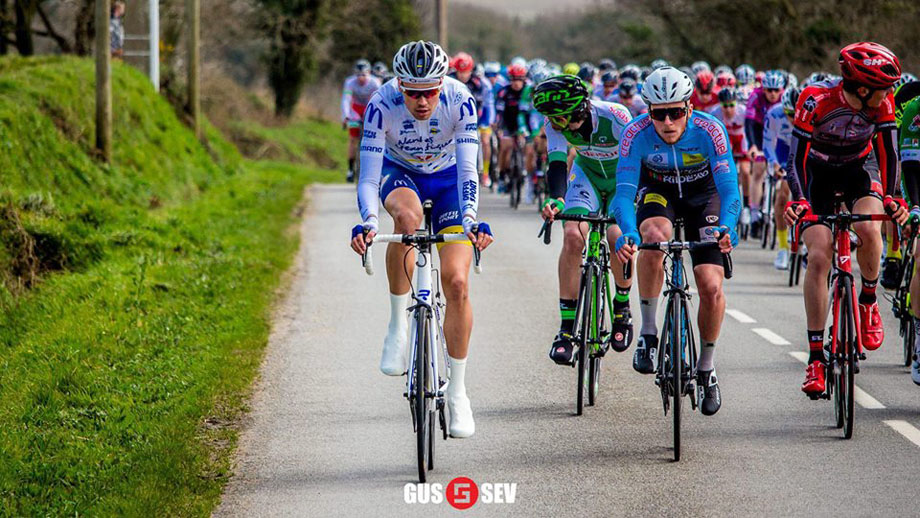 PEZ: Are there any season-long competitions at stake for you and/or the club?
The Tour of Brittany was our target for the season and to be honest the team couldn’t have done much better. I managed to get in the break on the first day and get a jersey and quickly moved up to fourth on GC. Unfortunately a crash took me out of the race on stage four which I’m gutted about as this was my target for the season. But we won it overall with Fabien Schmidt which was unreal – I was annoyed though that I couldn’t be there to finish and support.

PEZ: What do you do with your down time?
The usual, playing PS4, watching films and drinking coffee. Although I would love to have a part time job because sitting around doing nothing cracks me.

PEZ: Finally – what’s 2018 about?
Season 2018 is about getting as many results as I can and seeing what happens at the end of the season. But for me it’s important to have fun along the way. 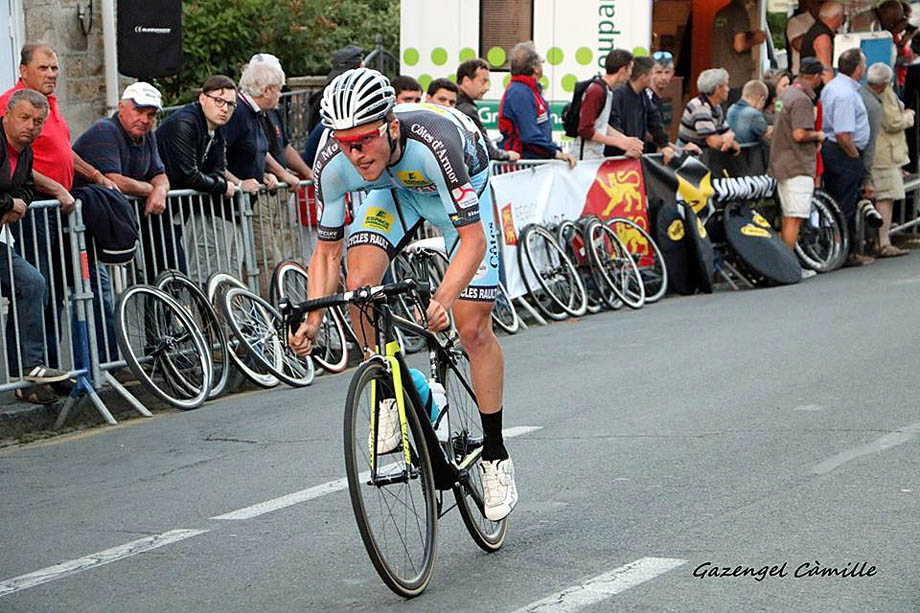